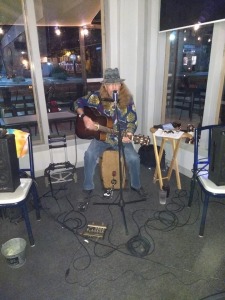 Picture taken at my last show at World’s End Brewing.

I was looking at my tour calendar that I had been ignoring and hadn’t crossed out all the cancelled dates yet. Fortunately, most of the breweries I was going to play are still surviving. I’m still hoping to play a few shows at the end of the month. But I thought I would feature the breweries here and give a shout out to them.

World’s End Brewing in Canon City, Colorado, was where I was to begin and end my tour. It was – after all – my World’s End Tour. It’s a great little brewery on the corner. Tom Martinez and his wife – a sweet couple – run the brewery. They have delicious food to go along with their tasteful craft beers.

Bavarian pretzel sticks go with almost any beer. Cactus Needles are strips of jalapeno and sweet onion, battered and fried, with blackened ranch. World’s End also has the usual appetizers with their unique spin on them. Don’t expect your usual fried pickles.

The entrees run the palate pleasing gamut from hot dogs and chili dogs, to Fish and Chips, wings and BLT, to build your own angus burger, salmon burger, a panini, to fruit and salads. Something to go with a variety of beers. Fortunately, World’s End has just such a variety. King’s Kona Stout is on the heavy end with coffee. They have a few fruit beers, currently Code Blue, Fairy Dust, and Frostberry.

The beer menu also usually includes a porter (Lethe’s Tears), a wheat beer (EJ-5), a kolsch (Reclamation), and a pale ale (Dragonspit). A few of my favorites – I have more – are the Suicide Blonde Bomber (blonde ale), Durty Leprechaun (Irish red ale), and the Dark Abockalypse (bock of course). Yet there’s more. When you’re in the area, check them out. If you can’t stop for while, grab some food and beer to go. You can order on the website before you get there. Either way, check out the beers they have. And tell Tom I said hi.