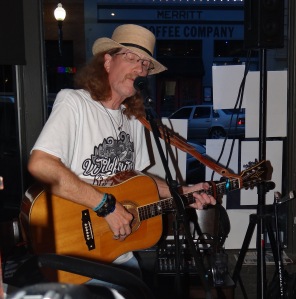 After a high speed drive back from Memphis with Cameron on Saturday the 15th, I took a nap, and headed to Angela’s at the Crosswalk for the Dallas Songwriters Association third Saturday showcase which I host. As you can imagine, I was a bit tired. A trip to Nashville, Memphis, and back in three days can do that. Then as I was setting up my sound system, a man and woman walked in the door.

The man looked at me and said, “Hi Dan.” I recognized him, but I couldn’t think of his name.

They asked if I would have time to talk to them. I assured them I would and then they went to 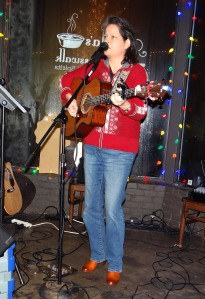 be seated. I finished setting up the sound, all the while trying to remember who they were. When I went to park my car, I called Cyndy and asked her if his name sounded familiar. No such luck. So I searched for his name in Facebook. There are a few Kevin Burns, as you would imagine. But one said we had two mutual friends, Tim Duggins and Jan Duggins. Between the two mutual friends and his pictures, I knew exactly who they were. 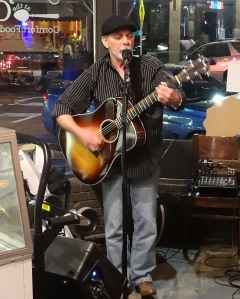 The rest of that story will be in part two. I want to give Cat McGee and John Mason their due. Their combined fans and friends were there. Cat thought that the extended table should be called Johnny Cat. Cat was at her best, as was John. The pictures are of past performances at Angela’s. I usually take pictures and am on top of things, but I was distracted. Find their music at the above links. Their Facebook pages (Cat McGee, John Mason) are the fastest way to know where they are playing. If you get to see either one or both of them play I guarantee you will enjoy the experience.