Dallas Guitar Festival, a Thank You, and the G2 Band 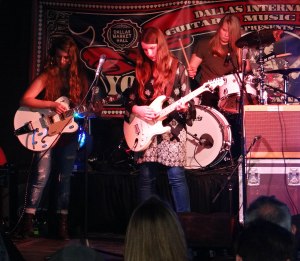 I was sitting at the DSA booth, talking with whoever was with me at the time, and watching people walk by. A good number of them came by the booth, but more just passed by. Since a lot of them weren’t songwriters, that made sense.

A group of younger girls and a guy walked by. I thought one of the girls looked familiar. As showcase director for the DSA, I try to promote younger talent, DSA or otherwise. But I just figured I was imagining things. They passed by at least once, maybe twice, when the girl I thought looked familiar walked intently toward me. She walked up and held out her phone.

“Is that you?” It was my website with my blog on the home page.

She said okay while still fiddling with her phone. She pulled up  this post.

“You wrote this about me a few months ago. I just wanted to say thank you. I really appreciate it.”

I always try to promote other musicians and songwriter. It was nice to hear someone say “thank you.”

The guy that was with them said that they were playing on the Young Guns stage. Jimmy Wallace and the staff of the Guitar Festival take entries from bands with members under the age of 20 for a chance to play the stage. I made a note of it.

The young girl was Madalyn White. The band was the G2 Band. I managed to get over to the stage soon after the start of their set. The lead guitarist and the drummer are Grace Kuch and Grace Ritter, I think respectively but I’m not sure. Madalyn played rythmn guitar. I didn’t have a chance to get the names of the rest of the band – keyboard player, bassist, saxophone player, and second vocalist.

At one point Madalyn said they were in a jazz band at school. They played mostly blues. But after Madalyn made that announcement, the saxophone player, bassist, and drummer played a very interesting piece with saxophone as lead instrument. A nice break from the constant blues through the weekend.

When G2 played the blues, their inexperience and naivete worked in their favor. It was refreshing – in contrast to the constant flow of standard blues licks mixed with doesn’t this sound like Hendrix licks or I can play Stevie licks, not to mention the I don’t know what I’m freaking doing licks throughout the weekend. I’m not referring to the bands on the stages.

I think that given another environment, with different audience expectations, G2 could relax and play music that comes more naturally to them. Not that they didn’t hold their own on the Young Guns stage. But they didn’t break loose either. I would have liked to hear a couple of jazz tunes. However, I was probably in the minority with that thought.

Check out Madalyn White when she plays solo and the G2 Band if you get the chance. You would be pleasantly entertained.