Cameron and I arrived in Nashville in time to  check into the hotel and be at Music City Center to register for Summer NAMM  just before 5 p.m.  After a mad dash around the show floor, we headed upstairs for the American Eagle Awards of the National Music Council  (NMC).

David Sanders, director of the NMC, welcomed the audience  and talked about the awards and the past recipients. Then he introduced Richard Leigh, who introduced Crystal Gayle before presenting her with the award. During her acceptance speech, she talked about growing up in Butcher Hollow and how valuable music was to her and what a vital service the NMC and its members do to involve children in music. Gayle asked Richard to play while she sang Don’t It Make My Brown Eyes Blue. Which is only appropriate, considering he was the songwriter of the song. 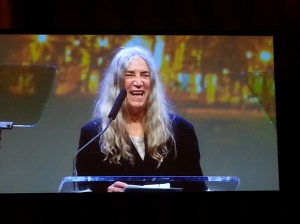 John Ingrassia introduced Patti Smith and presented her award. He talked about her long history of arts, music, and activism involvement. He said that she was also a very good and devoted mother. When Patti reached the microphone, she said that she hadn’t known she was going to have to say anything, so she didn’t bring any remarks. In true Patti Smith fashion, it was not long before she was off and running about activism, music, and working together – quite eloquently, in her own way. She sang a song with her bass player on acoustic guitar. There was noise and activity around me, so I didn’t get the name of the song.

Paul Shaffer introduced Harry Shearer with the worst introduction I have heard- and I’ve heard a few. He said he had his comments on his phone, but I’m not sure there was anything on it. He babbled some stupid jokes – including one that I will not repeat and that repulsed the audience. Everyone held their breath for a second, wondering if he had really said what they heard. Harry’s reaction seemed a cross between surprise, pain, and trying to act nonchalant. Then Shaffer sat down at the keyboard to play a song for Shearer. I think it was supposed to be funny, but it fell as flat as his jokes, only with music – which wasn’t all that swell either.

Harry Shearer brought it back in line by talking about the real reason he was there – as a passionate advocate for creators and artists. Among other things, he was voice-over artist on The Simpsons and writer for Fernwood 2 Night. He played bassist Derek Smalls in Spinal Tap. He has received to this day $18 for Spinal Tap. An effort has been underway for some time for those involved to recoup the money they should have made. That is a large part of what fueled his activism for creators and artists.

After Harry’s acceptance speech, the entire ensemble joined together on stage to play Patti Smith’s

People Have the Power. Shearer played a ukulele bass and Shaffer actually sounded good on keyboard. Patti felt the spirit rise up in her. No doubt stirred up by the memory of co-writing and performing the song with her late husband, Fred “Sonic” Smith, from MC5. Many people got into the spirit of the activist song while others weren’t quite sure. As an old hippie, I thought it was great. It was a perfect end to the awards.