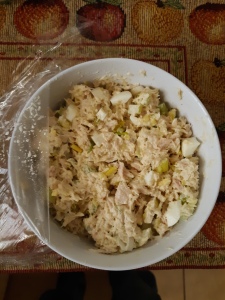 ….In the upstairs apartment at 916 Acklen Ave. in Nashville, we took turns fixing meals when we ate int. On one occasion when it was my turn, I decided to fix tuna casserole. It was pretty freaking good as I recall – as long as I’m not smelling tuna while I think about it. It received compliments.

After dinner we went out for drinks. We we got back, we drank beer and watched tv, among other things. The casserole dish – meanwhile – had been pushed to the side of the table in the kitchen. It got covered up by other things. With all of us actually working at the same time, as well as practicing and playing shows, the dish was forgotten, for a while.

But, it happened to be particularly warm for the next few days. We began to notice a smell. I don’t remember how long we looked, but obviously we found it. Which is when everyone looked at me and said, “you cooked it, you clean it.” So I did, alternately holding my breath and gagging.

Finally, it was over and I was seriously sniffing dishwashing soap. I will not describe it for a couple of reasons. One is because I wouldn’t wish the experience on anyone else. The second is because I don’t know if I could accurately describe it and not run to the bathroom. As it is, it will be a few hours before I can have any of the tuna fish salad.