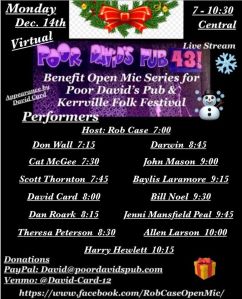 Okay, so the wild animals are a stretch. But a very large cat likes to settle back under the bushes in front of the house – driving our dogs bananas periodically. The cat looks like the burned cat at the end of Sweet Home Alabama – but half again as big. And I did have to get rid of a dead mouse in the middle of the driveway – for which I’m sure I can thank the cat. But there is no universe where a mouse is a wild animal, so, well, you know what, oh – never freaking mind!

But Poor David’s Pub and Kerrville Folk Festival are both real entities. At least for the moment. Like many venues across the country, they are trying to keep the doors open (and the festival/family going in Kerrville’s case). And until the government decides to, well, govern, it’s up to us to help.

A group of songwriters get together on Mondays on Zoom/Facebook to play their music in support of the two venues. Some are regulars, but there are always new songwriters in the rotation. Your duty – should you decide to accept it – is to watch and listen to the show and have a good time on a Monday. If you like the music and are so inclined please donate. The donations are divided between Poor David’s Pub and the Kerrville Folk Festival.

The show can be found at 7 p.m. CST on Rob Case’s Open Mic – Poor David’s Pub page. Rob is the host and his wife, Lynda, is the staff, the whole staff, and nothing but the staff. She spends hours inviting new songwriters and scheduling the shows as much in advance as she can. She stays in the “production” room during the show, reminding Rob of anything he missed or filling him in on new developments. And that’s not all she does. So if you watch the show, throw a comment Rob and Lynda’s way saying thanks.

In the spirit of shameless self-promotion, I am one of the regulars and I’ll be playing about 8:15. After Poor David himself talks all things PDP. It’s going to be another great show tonight. I say it every Monday, but it’s true. The cool thing is you don’t have to take my word for it – show starts at 7 p.m.