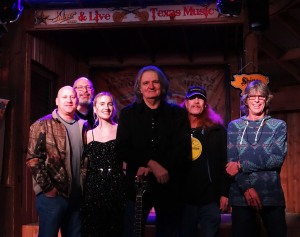 Shaun Outen and I had a good show last Tuesday at Love and War in Texas, Plano. We changed the starting time to 7 p.m. As usual the show was broadcast on TexasSelectRadio.com.

I started the show and played songs from my upcoming EP, Hello Out There. Mike Freiley took the stage after me. He played a set that included one of my favorite songs of his, Dog Left in 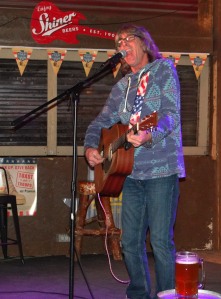 the Rain. He told the story behind the song when he played at my Songwriters for Autism benefit last year. The short version is he saw a dog that was hiding under parked cars in the rain as he was leaving an event.

Darren Rozell followed Freiley and played his original country songs. Which included It’s Complicated among others. Rob Case, with Alayna Mitchakes, performed next and wrapped up the show. They performed songs from Case’s cd, Last Call in Texas. Love and War was having the floors done and closed at 10 p.m., so we had to end at 9:30.

As always, follow the links and hear their music for yourself. More pictures can be found on my Facebook music page.