Now that Christmas is over and I’m finally starting to get over the cold I got for Christmas, it’s time to start catching up.

Jason Gibson and Mark Purnell opened the show at Love and War on December 19th that Shaun Outen and I hosted. They swapped songs as well as accompanying each other. Their set included Don’t Take My Whiskey and One Night Taco Stand. 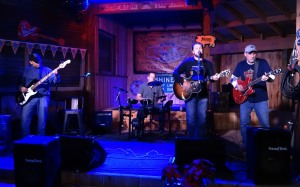 Cold Multiple & Domestic took the stage after Gibson and Purnell. The band consists of Craig Fasken, rhythm guitar and vocals, Craig Smith, lead guitar, Michael Levy on bass, and Matt O’Dea on drums. They play rock and roll and blues. And they do it well.

The band played songs by Old 97s, Bob Seger, and others. Their set also included originals like the one about Pancho Villa. Fasken said that the first two songs they wrote together were blues songs. Then they played Fifteen Years, one of the two songs.

I followed the band and played a few songs, including Waffle House is a Mighty Fortress, and I Got My Ass Kicked in Nashville from my upcoming cd, Hello Out There. Terry Strange followed me and closed out the evening with a set that included his songs, Angel Song,

and How About the Truth.

It was a great show. Come on out this Tuesday and join Shaun and myself. Come listen or plan to play a few of your songs on TexasSelectRadio.com. Good music, good food, friendly staff. Come join us!