Catch up continues…This year’s edition of SWRFA in Austin began on Wednesday, September 28 with an open mic at Threadgill’s at night. Since I had the recording time at the Harman truck for the JBL contest at 4:30 p.m. (see previous post), I would not be able to get to Austin in time to sign up, so I couldn’t justify the extra night in the hotel. I arrived at the hotel on Thursday about 3:00 p.m. in time to check in, register, get my song prompt, and get ready for the dinner and open mic by the pool.

Friday began with the First Timers Advice – per usual, followed by various other breakout sessions. Lunch and dinner on Friday and Saturday, and the brunch on Sunday morning are covered in the quite reasonable registration price. One of the things always mentioned for first timers that everyone pretty much takes to heart is to sit at the meals with people you don’t know. So you meet new people and make new friends and contacts. It can be a little tough when you know a lot of the people there. So if we sit at a table and there happens to be someone we know, we simply put some people between us.

again from 10:30 p.m. until early in the morning. The DJ reception, welcoming party, and dinner, all preceded the official showcase concert from 7:30 to 10. Throughout the hotel there were spontaneous bursts of animated conversation and song circles until the wee hours.

Saturday was similar to Friday with the general exhibit area and various breakout sessions. The second pool party and open mic was held from 3:30 – 5:30, with Butch Morgan hosting. Followed by dinner and the second official showcase concert. Then more sponsored showcases, spontaneous outbursts, and song circles.

Sunday brought the brunch followed by the song assignment performances. If you will recall I said that I got my song prompt when I registered. The challenge is to write a song using the prompt during the weekend and play the resulting song on Sunday. As advertised, it’s one of the highlights of the weekend. This year 61 people sang the song they had written. Many were funny – you should have heard some of the prompts! Others were heart-reaching and thought-provoking. Especially with a group of sleep deprived individuals in the audience. 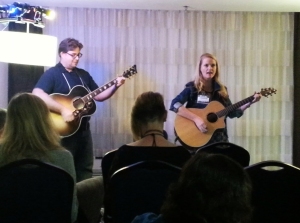 Good-byes were said throughout the morning as people from farther away had to leave. If it sounds like it was a whirlwind it was. A thoroughly enjoyable, powerful, musical whirlwind. Reuniting with friends, making new ones, learning about our craft and business, and hearing songs that inspire a songwriter to write other ones or just bring out emotions that need touching.

Dalis Allen and the volunteer staff did a marvelous job as always. Not to mention the hotel staff at the Holiday Inn Austin Midtown. Add to that a couple of hundred singer-songwriters and over fifty venue representatives, and for four days we were all one big happy, sleep deprived family. Join us next year. You will be welcome.